The results are out. After 784 votes and 81 comments, Let the World Unite Under One Colour has made it into the finals of the 1minutetosavetheworld video competition at number two on the public vote list. And I absolutely could not have done it without your support. It was so heartwarming seeing the wave of support from friends, family, and strangers alike.

I hope that this quick minute has encouraged you to make the little changes in your lifestyles to be more conscious of our planet. And while this video was aimed at bringing a positive, happy and colourful message about climate change, it was also one about overcoming fear.

You see, I’m a pretty shy person when it comes to approaching random people on the street. I recall walking through the park in Evanston, passing people one by one. I told myself each time that I’d muster up enough guts to talk to the next person, only to let my nerves get the better of me again.

When I reached the pier, I finally made the decision to ask a mother-daughter pair to participate in my video.

“They look like a friendly pair,” I thought to myself, “doesn’t look like they’re in a hurry to go anywhere. They’re a good place to start.”

After a good 20 minutes of hesitation, I took a deep breath and managed to strike up a conversation with them… only to get turned down because they didn’t wanna be on camera. Ouch.

But you know what they say… the first step is always the hardest. And the next person I approached – a young lady from the Netherlands who was out taking photographs with her DSLR – not only agreed to participate, but even engaged in a longer conversation about conservation! I ended up giving her my business card so we’d be able to connect again in future. Nice. 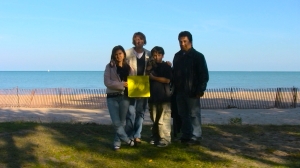 There were several other awesome people I got to meet. There was Paula and Jose who were their with their beautiful children and dog. They initially asked me to take a shot with just their son, and so I did. But about 5 minutes after I’d bid them farewell and left them my card, Paula ran up to me and yelled from behind, “Shuling! You know what? Let’s get a shot of the entire family together.” I guess they appreciated the purpose of the project more after they had time to think about it. 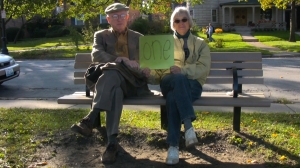 And then there was Alex and Mary, a lovely senior couple who were sitting on a bench enjoying the beautiful fall weather. When i first told them that I was making a video about climate change, Alex cocked his eyebrow and questioned, “what? you want to change this? It’s gorgeous out!” To which I replied, “then let’s fight to keep it this way.” :) 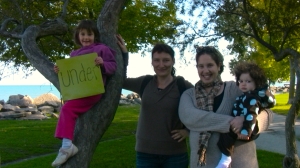 Finally, there was Marketa, who dropped me a lovely email two weeks later telling me about how she’s a puppetier from the Czech Republic (the Mecca of puppetry and animation according to her) who not only does puppet shows for kids birthday parties, but also conducts workshops teaching adults how to craft their own wooden puppets. A journey through her website brought me plenty of smiles through the many pictures and videos. Never have I seen a circle of adults so happy to be in a little fantasy world, bringing their puppets to life, having them interacting and telling stories. It’s fascinating how big a part of the culture puppets are over there. It opened up a whole conversation!  I replied excitedly, sharing with her my limited experience watching Chinese and Indonesian puppet shows, adding links to videos on YouTube to help demonstrate what those look like.

And as much as this video enabled me to meet some wonderful new people, it also helped me catch up with some old friends. The rallying for more votes meant that I had to connect with as many people as I could. It meant logging back onto msn, after a year of inactivity there. It meant making myself turn facebook chat on. It meant sending emails to many of whom i hadn’t interacted with in a while. And i’m glad! It started some very enjoyable conversations.

Finally, it’s also helped me truly appreciate my friends and family and the effort they put into helping me get the word out. For every re-tweet made, every e-mail forwarded, every facebook status promotion, every g-chat status shout-out, I am thankful.

I’d also like to give a shout out to Taylor, who’s truly been a source of energy and inspiration throughout the process. Just when I was feeling so worn out from the crazy ride, you came and picked me up again. Thank you for believing in me.

The fate of the video is now in the hands of the judges. They will decide which of the finalists get to be screened at the Climate Change Conference in Copenhagen. I hope to bring good news again when they make the announcement on the 24th. :)

4 thoughts on “The minute that lasted so much longer.”