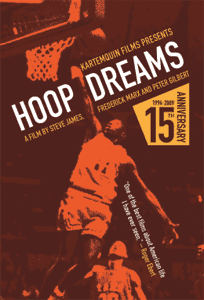 Tonight, with the wonderful company of Karl and Mario, I attended the 15th anniversary celebration of the iconic documentary – Hoop Dreams.

The crowd was a great mix of people – some who’ve been long-time supporters of Kartemquin Films since it was founded over 40 years ago, and some new friends coming out to support one of our national treasures. All that, coupled with the opportunity to mix and mingle with Kartemquin filmmakers in the beautiful Gene Siskel Film Center in the heart of Chicago, made the night one to remember.

I’ve personally been a great admirer of KTQ Films for a couple of years. JJ Hanley spoke to us about the documentary she produced, Refrigerator Mothers, in my ‘Community Integration of Labeled People’ class about a year ago. I was tremendously moved by the message it was trying to put across and decided to look up Kartemquin on the internet (thanks to the hint i got when she wore the KTQ t-shirt that day). To my excitement, i discovered that my TA for the RTVF 280 class i took the year before, Maria Finitzo, was also a Kartemquin Filmmaker. I remember how much I loved the clip of Terra Incognita she screened in class! And that beautiful moment of realization sparked a purchase of several KTQ DVDs. Hoop Dreams included.

Having followed the incredible journey of the two 14-year old boys featured in Hoop Dreams, it was so surreal watching them return as almost 40-year olds to speak at the event.

I think that’s one of the most beautiful parts of documentary though. The stories are so real and engaging that it makes you care about the futures of the characters featured. I loved learning about where William Gates and Arthur Agee are today and how being in the movie had affected their lives. It’s great that William, who’s now a pastor at Living Faith Church in Cabrini Green, and Arthur, who’s teaching youths about following their dreams through the ‘Hoop Dreams’ Curriculum, are out there being positive role models for people. When we had the opportunity to chat with Arthur after the event, it was really nice to see some of that boyish charm we’ve all seen in the movie, still in him. :)

After the keynote address by Peabody Award-winning author Alex Kotlowitz, we got to hear from Joanna Rudnick and the impact that In The Family has made. Now this showed us another one of the great beauties of documentary – exposing what’s unjust and pushing for change! The short clip she showed taught us about how some private company has patented a gene, and hence denied its access to women with a life-threatening genetic mutation, unless they’re able to fork out $3000 for it. That ruffled many feathers in the room instantly. As Joanna put it, how can you patent something we all grow? It’s like patenting the human thumb!

The night drew to a close as KTQ Films Founder, Gordon Quinn, made his way to the rostrum with a rousing standing ovation from the crowd, and introduced the board chairman, Steve Whisnant to give his closing remarks.

There was no better way to end the celebration, than by getting us all looking forward to Kartemquin’s next films! Watching snippets from The Interrupters and Invisible Seasons kept us glued to our seats and left us wanting more.

Oh boy. Over 40 years and counting. Kartemquin Films is truly a gem and will continue to be my source of inspiration for a long time. They’re doing exactly what i want to do in life – using the art of storytelling to bring together communities and to foster positive social change. I love it!

Thank you, Viva Doc of Columbia College Chicago for giving me the opportunity to be a part of this.